What you’ve been reading

Feed me, feed me now

This work is licensed under a Creative Commons Attribution 3.0 Unported License.

In a series of interesting posts this week, Neil Morrison has been talking on the XpertHR blog about Commercial HR. It’s been a fascinating series and links in with thoughts I had from last week’s #HRD11 conference organised by the CIPD.

Change seems to be the hot topic of the day and I’m keen to learn more about what this looks like. So I sat through 3 different presentations, all discussing change. In this post, I’ll share the learnings from them, and in a later post this week I’ll share my thoughts on what I think is happening.

The first was a talk by Mike Clayton about how to handle resistance to change. He’s written a book on it for the Management Pocketbook series.

Each of these needs to be dealt with specifically. If one layer doesn’t resolve the resistance, then you need to move on to the next.

He had a nice opening to the session – Respect your resisters.

I then attended a session with Irving Allen who talked about Change Agents.

I honestly found this a difficult session as the exercises they were asking the group to take part in were not suited to the environment we were in. Also the pair of presenters were not practiced enough with each other to deliver the material side by side. As a result I honestly took little away from this session. Except that they said you had to identify in the organisation who were:
– The targets for change
– The Change Agents
– The sponsors of the change
– The Change advocates

The last session was with Naomi Standford. She wasn’t the greatest facilitator I’ve had in a session, but she did help to deliver some very good models (Ha! Refer to earlier post about models) on how to manage change and how to communicate change.

She started by getting the group to discuss our understanding of what is the rate and scope of the change happening. I hadn’t considered this before and it’s a good reflection piece as as a change practitioner you often need to develop this understanding before you can launch into action.

The Change Management model she presented doesn’t seem to have a reference, so I’ll attribute it to Naomi, unless otherwise informed. She described a seven step process we should go through. This is:
– Set Direction
– Design and Plan
– Mobilise
– Deliver
– Transition
– Consolidate
– Improve

This process helps to realise that even though change may have been delivered, there are several important subsequent steps that need to be followed up.
She also presented this Communicating Change model. Again there seem to be no reference so I will attribute to Naomi. 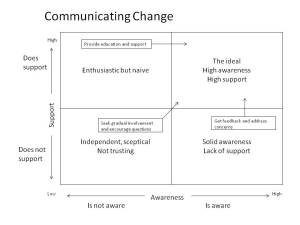 I found this particularly useful as a way to help understand what I need to do to communicate change effectively.

I'm an occupational psychologist by profession and am passionate about all things learning and development, creating holistic learning solutions and using positive psychology in the workforce. View all posts by Sukh Pabial

3 thoughts on “#HRD11 Presentations on Change”